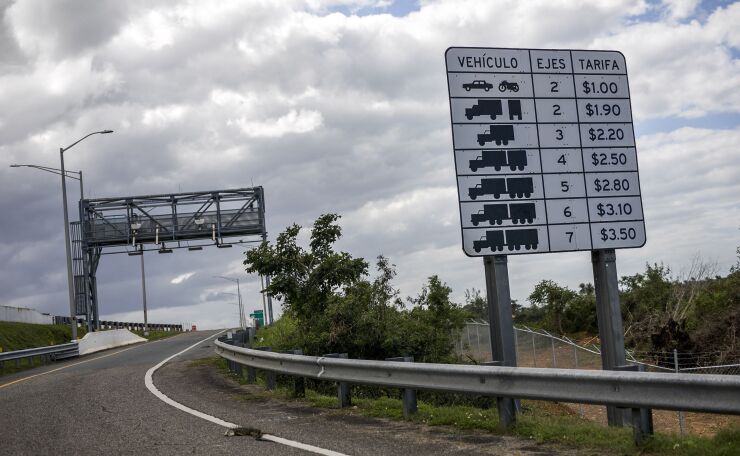 The Puerto Rico Highways and Transportation Authority issued $1.245 billion of restructured bonds and took other steps to enact its approved plan of adjustment Tuesday.

The HTA plan of adjustment reduces HTA’s $6.4 billion of total claims by more than 80%. According to its terms, holders of $4.3 billion of HTA bonds get today’s $1.245 billion of new bonds and $389 million of cash. The generosity of the deal depends on what type of original HTA bond was held.

Holders of HTA bonds may also receive recoveries through clawback contingent vehicle instruments on account of HTA claims against the commonwealth government. These were distributed in June.

About $1.2 billion of the original bond par value was uninsured and the rest was insured by Assured Guaranty, National Public Finance Guarantee, Financial Guaranty Insurance Corp., and Ambac Assurance.

“The plan of adjustment creates a solid foundation to ensure Puerto Rico’s roads and public transportation system are maintained and improved,” the Puerto Rico Oversight Board said. “HTA will now be able to implement the transportation sector reforms set forth in the certified HTA and commonwealth fiscal plans.”

All series are subject to a mandatory extraordinary redemption.

The bonds had yet to trade Wednesday morning.

The issuance was one step of several taking place Tuesday stemming from the court approval of the HTA plan of adjustment in mid-October.

There were also $359 million in subordinated obligations issued to address unpaid loans and $396 million in cash delivered to bond holders and insurers.

The HTA also made the first of two $24 million payments to Unsecured Creditors Committee creditors.

“It’s hard to expect much that’s definitive in early trading of the new certificates,” said Municipal Market Advisors Partner Matt Fabian. “Although they are effectively a new Puerto Rico security, the universe of Puerto Rico buyers is much the same as it was, and … they still face the overall cliff risk of how will the commonwealth government create policy once the board is gone?

“So, these are different but are likely to trade within the same range as other Puerto Rico securities: worse than COFINA, better than GOs,” Fabian said.

“With rates having increased since the new HTA bonds were structured, it’s unlikely they will trade up based on their coupons as new COFINA bonds did, for example,” said Puerto Rico Clearinghouse Principal Cate Long. “The new bonds do have a dedicated revenue stream (toll collections), which makes them more valuable than the clawback contingent vehicle instrument bonds, but at a certain point buyers are likely to reach their prudent limit of exposure to the island.”

Bitcoin price surge: Breakthrough or bull trap? Pundits weigh in
Vitalik Buterin divulges the ‘largest remaining challenge’ in Ethereum
Biden administration rolls out a blueprint for a ‘renters bill of rights’ – Here’s what it includes
Stocks making the biggest moves midday: American Express, Intel, Silvergate Capital and more
China’s economy looks set for a rebound in 2023, but a lot depends on one variable, KraneShares says