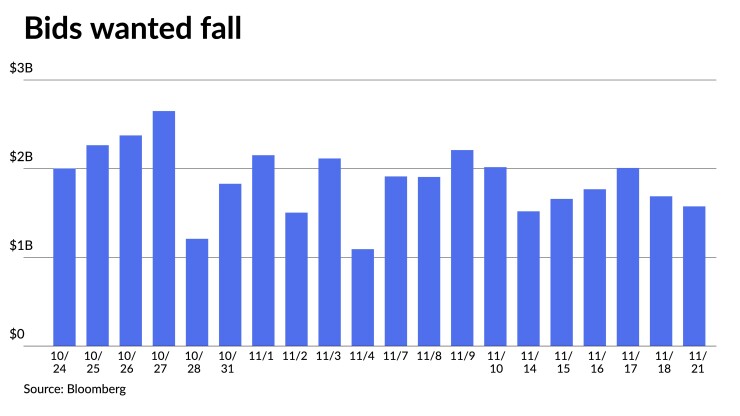 Municipals were firmer Tuesday on the short end, while U.S. Treasury yields saw larger gains five years and out. Equities closed in the black as the markets digested more Fedspeak.

While Federal Reserve members have continued to emphasize the need to continue tightening, comments from San Francisco Fed President Mary Daly indicated a “pause is on the table.”

Over the weekend, Atlanta Fed President Bostic voiced support for a further 75-100 basis point of further tightening and for a deceleration in the pace of rate hikes beginning at the December meeting, a report from Berenberg Capital Markets noted.

“The Fed’s November meeting minutes released this Wednesday will frame the contours of the internal debate around the FOMC and will likely point to broad support around the committee for a significantly higher terminal funds rate than that suggested by the Fed’s September SEPs (4.6%),” the report said.

“We look for another 100 basis points of Fed tightening before a pause in 2Q and project the economy tips into a mild recession by 4Q,” noted J.P. Morgan economists. They believe tightening should continue at least through next year and expect Treasury yields “to fall and the curve to steepen, but look for a more limited yield decline relative to prior cycles. High grade credit spreads should tighten while high yield spreads widen, they said.

Municipals have been outperforming UST for weeks now. Munis were bumped up to six basis points Tuesday while U.S. Treasuries saw yields fall up to seven on the long bond. Ratios were little changed.

Selling pressure in the secondary has fallen over the past few weeks and bids wanteds dipped Monday to $1.575 billion after hitting a high of $2.008 billion last week.

A year-end rally could well occur, he said, given “the availability of product and yield at historically attractive levels.” However, the Fed may keep hiking rates into year-end, thus “creating a material downside performance risk for current buyers,” he said.

He noted “the offered curve has swung well back into relative richness/overbought territory,” which could be “explained by strong demand alone or, more plausibly, strong demand effects being multiplied by thin market liquidity and thus achieving less sustainable prices.”

Even if the three-week rally, which has dropped offered curve yields by around 50 basis points, “winds up not being a permanent pivot back to a net buying sentiment, the power behind it (as fueled by supply scarcity) is allowing it to run farther and longer than otherwise,” he said.

This would present “a confusing signal to investors accustomed to reading the muni market’s often momentum-driven price action,” he noted.

“While mutual fund outflows slowed last week — a positive sign — and tax-exempts dramatically outperformed the taxable market when such could not be readily explained by an approaching holiday or late day adjustment in Treasuries,” according to Fabian said.

Additionally, he said, fund NAVs have recouped around 20% of year-to-date losses in the last three weeks.

“Further, trading data suggest that dealers have been caught short with respect to customer interest and have been compelled to source bonds from the Street: showing demand strength,” he said.

More supply scarcity ahead
Lower supply in 2022 has somewhat helped the market avoid larger losses, many participants have said. Ramirez & Co. has joined the chorus of lower supply expectations for 2023, as well.

Peter Block, managing director of credit strategy at Ramirez, expects that 2022 will end with gross supply of around $370 billion of long-term bonds, a decline of roughly 23% year-over-year, made up of around 85% tax-exempt bonds and around 15% taxable bonds.

New money was off — down 6% at $325 billion — while refunding volume fell off of the proverbial cliff, “down 66% to around $46 billion driven by the horrendous macro rates backdrop,” he said.

“Concerns about inflation and tight labor market conditions forced the Fed to adopt a much more hawkish stance in 2022, as it embarked on an aggressive tightening cycle,” said Barclays strategists.

This caused USTs to rise more than 200 basis points year-to-date and rates have been volatile, “driven by recession fears and geopolitical tensions,” resulting in lower supply, they said.

For next year, Ramirez & Co. forecasts of $380 billion of long-term bonds, an immaterial year-over-year change of positive 2.7% versus 2022 mostly driven by still relatively healthy, but essentially flat new-money issuance of $329 billion (up 1% year-over-year), per Block.

The firm expects tax-exempts to increase overall by 9% to $343 billion (90% of issuance) and for taxable munis to decline for the second year by around 33% to $37 billion (10% of issuance). He expects the growth to be mostly driven by new-money.

“Our view of muted issuance in 2023 primarily reflects continuation of uncertainty and volatility amidst what we expect to be a continued high rate environment,” Block said.

Market expectations for peak fed funds rates of around 4.5%-5% “continue to push further into 2023 as the U.S. economy retains extraordinary strength amidst very high, albeit moderating inflation,” he said.

The primary risk to the forecast, he said, is “if inflation decelerates, causing peak rates to decline precipitously near term.”

Additionally, the majority of the around $90 billion of new bonds approved on Nov. 8 around the country “will likely not see the light of day until at least the end of the year, but more likely 2024 onward,” he said.

The commonwealth, rated Aa1/AA/AA+/, plans to sell on Nov. 29 in two series. Proceeds will be used to reimburse the Commonwealth for various capital expenditures.

China’s economy looks set for a rebound in 2023, but a lot depends on one variable, KraneShares says
Biden administration rolls out a blueprint for a ‘renters bill of rights’ – Here’s what it includes
Inclusive Capital takes a stake in Bayer — 3 ways it may build value with a sustainable focus
Genesis files for bankruptcy, FTX explores a reboot, and Bitzlato news: Hodler’s Digest: Jan. 15-21
Survey Finds That Service Members, Veterans Are Optimistic About Home Buying In 2023