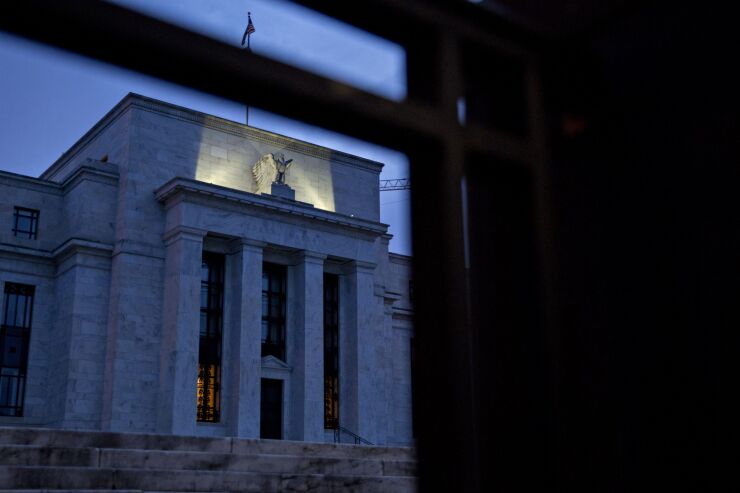 Democratic senators led by Bob Menendez urged the Federal Reserve to take a more active role in the selection process of the heads of its regional banks so that more diverse candidates would be considered.

In a letter to Fed Chair Jerome Powell, who will appear before Congress Wednesday and Thursday as part of legally mandated semiannual testimony, the lawmakers asked the Fed’s Washington-based Board of Governors to work with the 12 reserve banks to establish a standardized process for appointing its presidents and directors that “promotes meaningful transparency and public input.”

“The current makeup of the Federal Reserve banks does not reflect the demographic and economic diversity of the districts they serve,” Menendez and Sens. Sherrod Brown, Elizabeth Warren, Catherine Cortez Masto, Ben Ray Lujan, Bernie Sanders, Richard Durbin, Raphael Warnock and Alex Padilla wrote in a letter sent to Powell on Tuesday.

The request comes on the heels of the appointment of a new president to the Reserve Bank of Dallas. Menendez had called for the new chief to be a Latino because Hispanic Americans make up almost 40% of the bank’s district. The New Jersey senator, a Latino, has criticized the Fed for its lack of diversity and in particularly for never having been led by a Latino American in its 108-year history.

“We just cannot continue down the same path and expect a different result,” Menendez said in an interview following the Dallas Fed announcement. “They’re making critical decisions that have consequences to one thing: the citizens of America. They’ve repeatedly ignored that when the Fed is making decisions on policy.”

While two of the final candidates for the Dallas job were Latino, they were not chosen, Menendez said. The bank’s selection committee, made up of some of its directors, instead chose Lorie Logan, manager of the Fed’s system open market account at the Reserve Bank of New York, who isn’t Hispanic. The Board of Governors has final say over the selection committee’s pick.

Menendez voted against Powell’s confirmation, citing the central bank’s failure to appoint a Latino leader. In their letter, the Democratic senators also criticized the lack of industry diversity at the regional Fed banks, saying that a majority of their directors come from the banking sector.

The lawmakers proposed measures to make the director and president selection process more transparent, including a public-comment period when candidates are being chosen and publication of diversity metrics of the potential candidates. They asked the Fed to respond to their letter by July 22.

The Fed will need to select new leaders for the Kansas City and Chicago branches next year, because the current presidents will both reach the mandated retirement age of 65.

The central bank has been criticized for its lack of diversity in both leadership and among its professional ranks, with some arguing that the homogeneity can lead to groupthink and policy that doesn’t work for everyone. It has made strides recently on the leadership front, with President Biden appointing the first-ever Black woman to its Board of Governors.