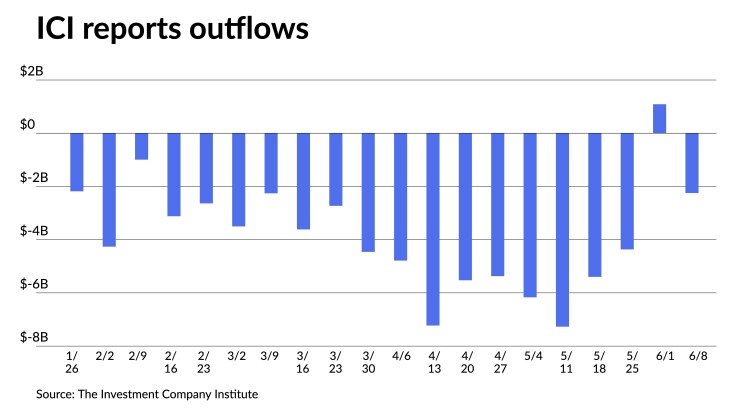 The move, prompted partly by hotter-than-expected inflation data Friday, is the largest rate hike since 1994.

“Investors appear encouraged that the FOMC is willing to take forceful action to try and get inflation under control,” Wilmington Trust Chief Economist Luke Tilley said.

By front loading rate hikes, he said, the FOMC will have “more optionality as the year unfolds,” and will be able to accelerate hikes if inflation persists, “but if any cracks appear in the economic recovery they’ll have the option to slow down while still having rates below their estimate of neutral.”

Triple-A muni yields were cut a basis point or were little changed while UST yields fell up to 23 basis points on the short end.

The Investment Company Institute reported investors pulled $2.247 billion from muni bond mutual funds in the week ending June 8, down from $1.092 billion of inflows in the previous week.

Exchange-traded funds saw outflows at $398 million versus $817 million of inflows the week prior, per ICI data.

Munis were mostly steady throughout the day as broader markets reacted to the FOMC decision.

Markets would have been more surprised by a move that wasn’t at least 75 basis points, said Tom Kozlik, head of municipal research and analytics at HilltopSecurities, in a Tuesday report. He said it’s possible that the Fed raises a total of 275 basis points by the December meeting.

Despite the three-quarter rate hike, he said, “tax-exempt and taxable municipal yields, relative value indicators, and credit spreads are all still very attractive compared to historical pricing and some other fixed income options.”

Beyond this, there is opportunity in the municipal bond market, according to Jim Conn, portfolio manager of municipal Bonds for Franklin Templeton Fixed Income.

“While volatility is at heightened levels for both rates and quality, opportunities are plentiful relative to alternative fixed income markets,” Conn said Tuesday. “We are finding attractive offerings within sectors that traditionally have larger spreads, like multifamily housing, healthcare, charter schools, and airports.”

Some investors are willing to look past the volatility and anticipated tightening by the Fed to participate in the municipal market — albeit with some stipulations, according to Conn.

However, overall on a risk-adjusted basis, the after-tax values of municipal bonds are historically attractive, Conn noted.

“It’s difficult to predict when investors will return to net buyers,” he added.

If they need an incentive they can turn to the attractive muni-UST ratios, which have returned to historic levels, according to Conn.

This appeals to municipal investors because yields have reached an attractive level on both an absolute and relative basis, he noted.

At the same time, the municipal market benefits from its traditionally low default rate — not to mention its recent recovery following the pandemic as states’ fiscal health is strong.

As the second half of the year approaches, Conn has a positive outlook in the municipal market — despite some challenges.

Although demand has weighed down the market year to date, Conn said Franklin’s view is that municipal bond prices provide attractive opportunities.

“When investors change their sentiment is difficult to predict,” he said, adding that they will be met with fewer offerings, stronger credits, and large tax advantages going forward through year-end.

Fed rate hike
The Federal Open Market Committee raised its fed funds target rate 75 basis points, the largest raise since 1994, to a range 1.5% to 1.75% as inflation continues to rage, with more hikes anticipated.

The Summary of Economic projections released Wednesday anticipates a 3.4% rate by yearend, which would mean another 175 basis points of rate hikes this year. Still, the markets were anticipating a 4% target at yearend.

The post-meeting statement acknowledged the panel “anticipates that ongoing increases in the target range will be appropriate.”

“The Fed are now scrambling to get interest rates above neutral as soon as practically possible, hiking at an increasing pace at each successive meeting,” said Brian Coulton, Fitch ratings’ chief economist. He pointed to the Fed’s expectation of “a significant rise in unemployment by 2024” and omission in the statement of expected continued labor market strength.

“There’s no attempt to sugar the pill anymore or talk about a soft landing — it’s just all about inflation, which is surprising again on the upside with a near 1% increase in their end year PCE inflation forecast since March,” he said.

In his post-meeting press conference, Federal Reserve Board Chair Jerome Powell noted the hike was “unusually large” and something he doesn’t expect to become common. But inflation has continued to surprise to the upside since the last Fed meeting. “We expected to see inflation flattening out or declining” by this point, he said. “We thought strong action was appropriate at this meeting.”

Looking forward, Powell said next meeting could result in a 50 bps or 75 bps rate increase, depending on how the data come in.

That statement “was perceived to be more dovish than the market expectation for a 0.75% increase” at the next meeting, said Jay Hatfield, chief investment officer at Infrastructure Capital Management. “Stock and bonds prices spiked with the S&P now up over 80 points and 10 year bonds up almost a full point.”

Fed rate increases combined with quantitative tightening “takes the U.S. into uncharted territory with significant risks to growth,” he said. “The hike today sent exactly the right message to markets.”

“The challenge now before the Fed is retaking the narrative that they are on top of rising inflation, which will persist along with market volatility until the data indicates peak inflation has been reached,” said Phil Rasori, chief operating officer at MCT.

R.J. Gallo, senior portfolio manager at Federated Hermes, said the dot plot suggests “the Fed will go to restrictive on policy with year-end 2022 and 2023 target rates at 3.4% to 3.8%, respectively, and it projects GDP will be below 2.0% in each of those years, with unemployment rising in 2023 and again 2024.”

Bringing down inflation without hindering employment “may be an elusive objective,” he said. “It looks like a soft landing, but I think the Fed is tacitly acknowledging that a recession may be result.”

As for the markets, Gallo said, “yields are falling today and we may have seen the worst of the bond sell-off for the near term. More stable or mildly declining U.S. Treasury yields should be supportive for muni markets to stabilize as well.”

“A recession is all but certain,” said Christian Hoffmann, portfolio manager at Thornburg Investment Management. “So, whether or not we’re sliding into recession isn’t the question we should be asking, but rather ‘how much will it hurt’?”

Instead of a soft landing next year, expect a mild recession, said Wells Fargo Securities Chief Economist Jay Bryson “Indications that inflation is becoming more entrenched in the U.S. economy has caused the Federal Reserve to become even more hawkish,” he said. “We now judge that recession next year is more likely than not.”

The Fed will sacrifice growth to bring down inflation, said Tom Garretson, senior portfolio strategist at RBC Wealth Management. “We believe the Fed will shift back to a half-point pace at the July meeting and through the fall, with a 25 bp rate hike in December achieving their new 3.25-3.50% target range by the end of the year, though we expect that rate cuts will be on the table as early as next year as the significant tightening of financial conditions already seen this year could weigh on economic activity next year to a greater extent than is widely appreciated.”

In his press conference Powell “explicitly said the FOMC is not in complete control of inflation and growth, citing the challenges coming from Russia’s war on Ukraine and China’s COVID fighting measures as disruptions that are likely to buffet the recovery,” Tilley noted.

And inflation will be the determining factor going forward, he said. “We do expect inflation to decelerate but the timing may be pushed out on the calendar. The more it gets pushed out, the more aggressive the Fed needs to be, raising the risk that a softish landing turns into a ‘rockyish’ one.”