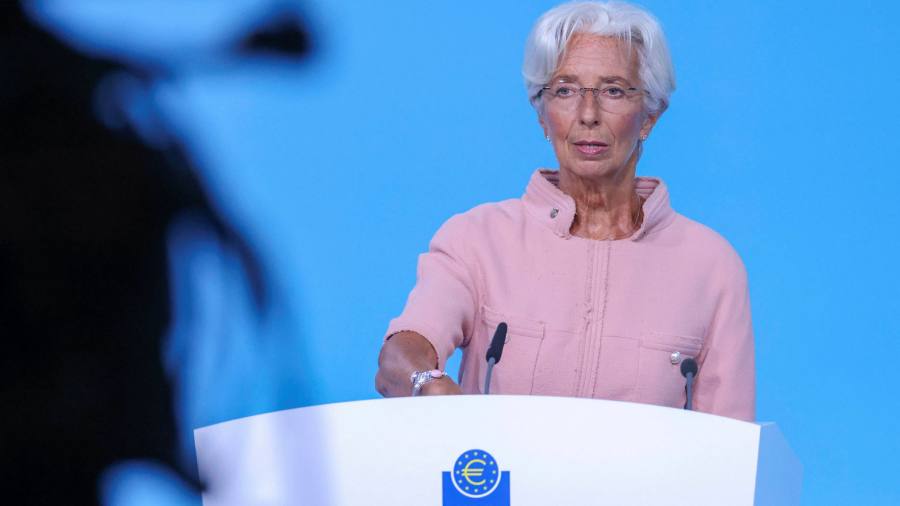 Europe’s economy is roaring back from the coronavirus crisis. Growth in the euro area outpaced both the US and China in the last quarter, more than 70 per cent of EU adults have been fully vaccinated against Covid-19, investment is booming and unemployment is falling.

However, European Central Bank president Christine Lagarde sounded a cautious note last week, saying “we are not out of the woods” and highlighting a number of risks over the coming months, despite raising its growth forecasts for the third consecutive time this year.

Economists say the European economy is in the “sweet spot” of its bounceback from the record postwar recession caused by the pandemic last year. But they warn the region looks set to follow the pattern seen in the US and China, which recovered faster from the Covid-19 crisis only for their rebounds to lose momentum more recently.

“We will get a good third-quarter growth number for the eurozone, but the winter brings the risk of a slowdown,” said Erik Nielsen, chief economist at UniCredit. “Our leading indicator is nosediving into the end of the year, so there are warning signs this recovery may not be as smooth as people think.”

The biggest warning sign is coming from bottlenecks in the global supply chain that have left manufacturers grappling with shortages and soaring prices of everything from semiconductors and paper to steel and plastics.

Executives at carmakers lined up at last week’s IAA Mobility conference in Munich to warn that there was no end in sight for the chip shortage that has forced them to shut production lines and left their output 30 per cent below pre-pandemic levels. “I believe the third quarter will be the trough, and then we will start moving back up again in the fourth quarter,” said Ola Kallenius, Daimler’s chief executive.

“The supply side issues are definitely a problem,” said Gilles Moec, chief economist at Axa. “Just look at the gap between orders and output at German carmakers, it is massive, and a good chunk of demand is not being filled so we are missing some output.”

Moec added that supply chain problems could hit consumer spending if they fuelled higher eurozone inflation, which already rose to a decade-long high of 3 per cent in August and is expected to keep rising for several more months. “We are starting to see that affect consumers in the US and it could happen here in Europe too,” he said.

The second risk for Europe’s recovery is if the Delta variant or another strain causes a further damaging wave of Covid-19 infections, despite rising vaccination levels.

“The spread of the Delta variant has so far not required lockdown measures to be reimposed,” Lagarde said. “But it could slow the recovery in global trade and the full reopening of the economy.”

The number of coronavirus patients in intensive care in Germany doubled in the past fortnight, though it is still well below previous peaks. In France, the Pasteur Institute warned last week that lifting all remaining restrictions would “lead to significant stress on the health system”, with more than 5,000 hospitalisations a day — more than at the peak of the virus last year.

A further risk for the export-focused eurozone economy is that the recent slowdowns in the US and China could weigh on growth in the bloc.

Despite these clouds on the horizon, there is widespread optimism that the worst of the Covid-19 crisis in Europe is over and the region is set for a couple of years of strong growth, which the ECB said would reach 5 per cent this year and 4.6 per cent in 2022.

Daniela Ordonez, an economist at Oxford Economics, said Europe had reached “a turning point” in its rebound from the coronavirus crisis, adding: “Discussions about the post-pandemic era are starting to dominate as the economic recovery is now in full swing.”

The EU’s statistics agency upgraded its second-quarter growth figure for the eurozone to 2.2 per cent last week, saying most of this came from a 3.7 per cent jump in household expenditure. Government spending and business investment were also higher, while a rundown of inventories was the only slight drag.

“In terms of momentum, we are in a sweet spot because growth will remain strong by European standards even next year,” said Silvia Ardagna, chief European economist at Barclays. “Some sectors have still not caught up with pre-pandemic levels yet, there are a lot of excess savings to be spent and the labour market is improving faster than expected.”

Unemployment in the euro area has fallen from a high of 8.5 per cent after the pandemic hit last year to 7.6 per cent in July, even if there are still about 900,000 more people out of work than before the crisis and many more relying on furlough schemes for income. Meanwhile, southern European countries have benefited from a stronger rebound in tourism than was expected over the summer.

Most economists expect European governments to maintain their supportive fiscal policy into next year — particularly as both Germany and France are preparing for elections. A further boost will come from the EU’s €800bn Next Generation recovery fund, which is starting to flow into national coffers.

Lagarde said euro area gross domestic product was on track to regain its pre-pandemic level by the end of the year — a milestone the US and China have already hit but the UK is unlikely to reach until next year.

However, Nielsen at UniCredit said the real test for the eurozone was how quickly it would close its output gap by returning to the level it was expected to have achieved before the crisis hit, which he said was unlikely until 2023. “Things could plateau at this level long before we get back to the pre-pandemic trend line,” he warned.