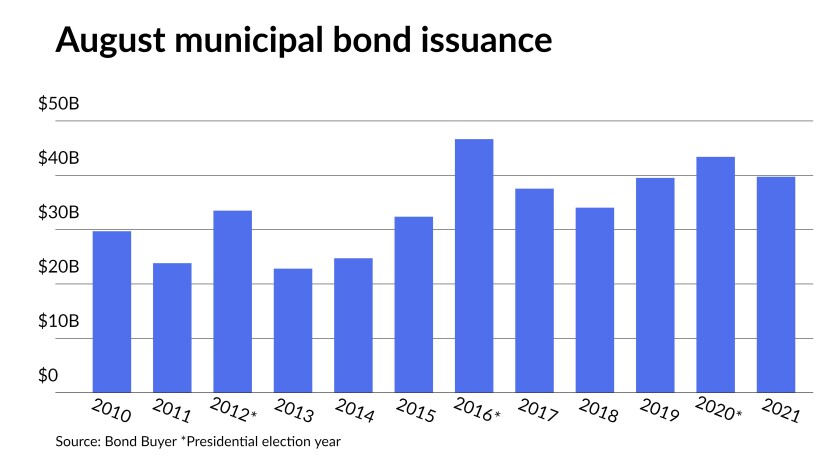 A mixture of factors such as rising interest rates, uncertainty over federal monetary policy and unprecedented federal aid for state and local governments fueled a drop in overall bond volume in August from the prior year.

August saw some volatility with a back-up in yields that began mid-month, giving some issuers pause. However, more the case in 2021 is that federal aid and a better economic recovery has moved issuance slightly lower. August 2020 also was an outlier month in an outlier year for historical purposes as issuance shifted to later months after the primary all but shut down in the spring due to COVID.

“At an 8.4% decline, I think a big part of that has to do with a shift in issuer focus, toward several things,” said Jeff Lipton, managing director of credit research at Oppenheimer Inc. “The infrastructure debate — we still have not finalized infrastructure legislation and issuers are trying to assess their capital needs.

“Specifically for munis, there are new state and local funding allocations that issuers are still trying to figure out how best to incorporate such funds into the budgetary process,” Lipton said. “And part of it is the uncertainty with respect to central bank monetary policy and the added market volatility.”

“As long as rates are low enough and if you have a compelling enough spread environment that produces fertile ground for taxable advance refunding issuance we will see them,” Lipton said. “But part of that advance refunding need has been satisfied. Also the rate and spread relationships are not necessarily as compelling as they were at the beginning of the year.”

“We have had more in the way of volatility in August, rates have backed up a bit and those market conditions have all served to create lower taxable muni volume,” he added.

Lipton expects aggregate taxable sales for 2021 are going to be something closer to 20%, versus 2020’s 30% of total muni volume.

Part of the reason for some of the decline in taxables has to do with alternatives such as forward-delivery bonds, which have already broken records for issuance, private placements and the issuance of corporate CUSIP debt.

“The forward delivery bonds are a vehicle that provides, from an issuer perspective, a way of avoiding or decreasing interest rate risk,” Lipton said.

Given that most expect interest rates to rise, forwards have become another tool for issuers to lock in current low rates.

But the appetite for exempts grew into the summer. “If you look at where aggregate new-issue volume is, through the summer months, we have had consistent net negative supply figures,” Lipton said. “That places us in a fairly sobering position. New-issue supply simply has been unable to fill the void left by maturing securities and redemptions.”

“The prospects for higher individual and corporate tax rates hang in the backdrop,” Lipton said of the increased demand for exempt securities.

“With so much federal support flowing through the system, many issuers have not been strongly motivated to access the capital markets,” Lipton said. “Part of this is a wait-and-see approach from the issuer perspective.”