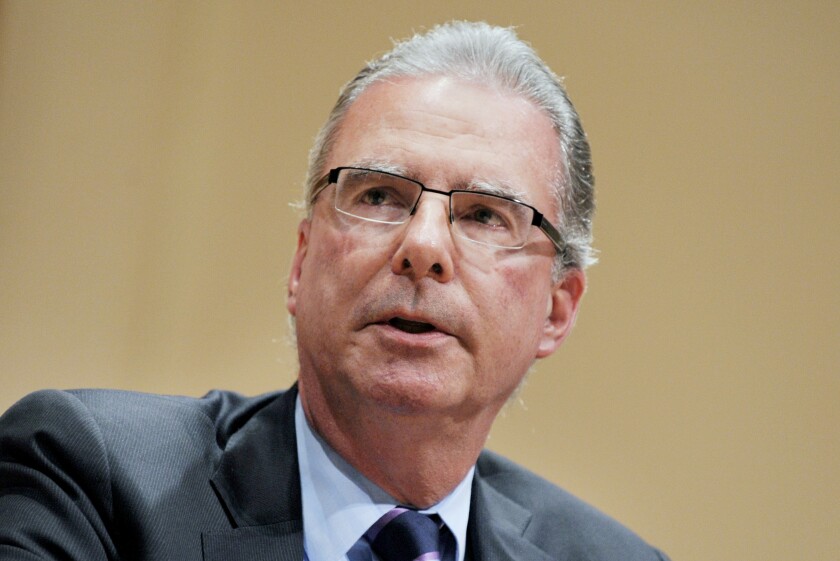 Municipal market participants question the wisdom of executing Puerto Rico’s bankruptcy without local legislative approval for new bonds and instead relying on court-approved debt, as the Oversight Board is exploring.

The board has taken the position that pension cuts — proposed now at 8.5% for pension payments of more than $1,500 per month — are key to a fair bankruptcy resolution as pensions make up $48.7 billion of Puerto Rico’s hefty $112.7 billion of debt and pension liabilities. In nearly every municipal bankruptcy case, pension cuts have been made.

The board argues the bonds could be restructured and pensions cut without legislative approval. In the board’s Disclosure Statement for the Plan of Adjustment — soon to be distributed to debt holders — the board devotes six pages to presenting its position on this topic. The board also discusses relying on the authority of a 1942 Puerto Rico law, which has been used over the years to justify bond refundings, to support the restructured bonds.

The larger question arises from this potential route: If lawmakers do not back new bonds will those same lawmakers willingly pay the debt service on the court-ordered bonds? Even if the Oversight Board can legally approve new debt for the deal, some market participants say the future “willingness to pay” factor is the larger consideration for bondholders. Given that Puerto Rico stopped paying debt service in 2016, it is not an unreasonable question.

Historically, local legislatures and city councils have approved restructured bonds as part of municipal bankruptcies. Several municipal market observers said they believed the board could approve the deal without legislative approval but the risks involved are high in doing so.

“The key point is the island’s willingness to pay,” said John Ceffalio, senior municipals strategist at CreditSights. “If the governor and legislature don’t come onboard, that weakens credit quality of the new bonds which would sharply reduce their value. Future legislators will need to appropriate for debt service, both before and after the board’s departure.

“Willingness to pay is always one of the most important credit considerations, and if the island’s politicians won’t vote to authorize the new bonds, I can only assume they aren’t willing to service that debt,” Ceffalio said.

Cumberland Advisors Portfolio Manager Shaun Burgess said, “It would not surprise me if the Commonwealth [of Puerto Rico] attempted to walk away from debt issued without legislative support at some future date. Consequently, I would be very leery as an investor if repayment on new securities was subject to any government appropriation.

“If the government chose not to appropriate funds for repayment then you would end up going through something like this all over again and the only people who end up ahead are the lawyers,” Burgess said.

Puerto Rico attorney John Mudd said he believed the board could legally restructure the central government debt without the local legislature approving the new bonds. “I read the cases cited by the board in their Omnibus reply to the opposition to the Disclosure Statement and they are right on point, although they are not First Circuit cases.”

Mudd said he thought payment of the bonds would be safe in the next few years. If the local government refused to pay them, the board could seek to gain control of Puerto Rico’s Treasury bank accounts. Mudd said the government would try to avoid this.

He and others said the scenario of the government choosing not to pay was more likely to occur after the board left and if the island is in another financial crisis, “which is likely to happen a few years after the board exits.”

A holder of Puerto Rico central government bonds disagreed with Mudd on whether the board could legally issue new bonds without legislative approval. He pointed out Plan Support Agreement language that the bond-holding investment funds signed with the board, which says “legislation [is] required for the issuance of the new general obligation bonds and the Contingent Value Instruments [which would support several Puerto Rico bonds] and to facilitate confirmation and consummation of the plan,” to quote from the PSA.

The plan also states, “that neither the governor nor the legislature shall enact, adopt, or implement any law, rule, regulation, or policy that impedes, financially or otherwise, consummation and implementation of the transactions contemplated by the plan.”

“It is natural that creditors want the legislature to back general obligation debt,” the bondholder said. “It is ridiculous to expect the local government will adhere to a debt deal it didn’t agree to.”

Puerto Rico Senate President José Dalmau did not respond to a request for a comment for this story.

Apart from the right of the board to approve the bonds without board approval, some analysts noted secondary market buyers would be cautious of the bonds.

“Secondary market reception of the new GOs would be directly jeopardized if the legislature takes legal action to invalidate or if individual legislators state their intention to default once the board leaves the island,” said Municipal Market Analytics Partner Matt Fabian. “Short of that, this is still a highly speculative financing, but it’s hard to assume that any bond, even one this large, can’t be distributed at some price in the current high-yield market, in particular with the sponsorship of cornerstone investors.

“What that price will be is unclear; municipal investors aren’t used to buying a bond secured by an unwilling government’s full faith and credit pledge,” Fabian said. “In particular for a government that has already defaulted on its GOs.”

“Note that the plan itself does appear payable, and the bonds, were this a willing borrower, would represent a reasonable, if still below investment grade, risk,” Fabian said.

“As a practical matter I think the market would accept new securities issued through [Oversight Board] action if the restructuring court and supportive documentation codified creditor protections as they related to both repayment and claims,” Burgess said.

“The current market is very forgiving in terms of credit so I think this could get done with little penalty in terms of yield to the commonwealth if investor protections are adequate and the price is right,” Burgess said.

Muni Credit News Publisher Joseph Krist said the board’s attorneys “make a compelling argument” that the legislative approval is not needed, but he and Tom Sanzillo, director of financial analysis at Institute for Energy Economics and Financial Analysis, agreed that without legislative approval, the muni marketplace would treat the bonds as highly speculative.

John Hallacy, president of John Hallacy Consulting, said, “Some buyers who are accustomed to a higher level of risk would participate at a price. The consideration will be whether the bonds could be invalidated at a future date. Can the oversight board order that the bonds must be paid due to federal law superseding local … law?

“The even greater consideration will be what are the available remedies if there are violations or non-payments. The record is not very stellar in this regard. There is time and expense in going back to court to seek remedies if need be.”

University of Illinois Professor of Finance Robert Chirinko said, “The legal issues are very complicated and create uncertainty … The proposal creates an additional problem by not clearly specifying income streams.”

The Puerto Rico Oversight, Management, and Economic Stability Act says Puerto Rico should ultimately be able to reenter the market on its own standing, the bondholder said. Without legislative approval, it is hard to see that Puerto Rico government is moving in that direction.

To have the judge approve the new bonds is a practice not done in the municipal market, he said.

From a political standpoint, the legislature wants to get a win from the board, the bondholder said. Its members want about five things from the board, but they may be willing to walk back the number of things they are demanding, he said.

The board should reach a deal with the legislative leaders, the bondholder said. The government has plenty of spare money to provide room to the board to do this.

The timing for the deal is going to be difficult, the bondholder said. The legislature must approve the deal before the plan of adjustment hearing, set for various dates from Nov. 8 to Nov. 23.

Why are crypto fans obsessed with micronations and seasteading?
Stocks making the biggest moves after hours: Whirlpool, NXP Semiconductors, UnitedHealth and more
Ethereum staking withdrawal testnet Zhejiang to go online Feb. 1
The Federal Reserve is likely to hike interest rates again. What that means for you
Trading Psychology: Hope and Fear in Trading