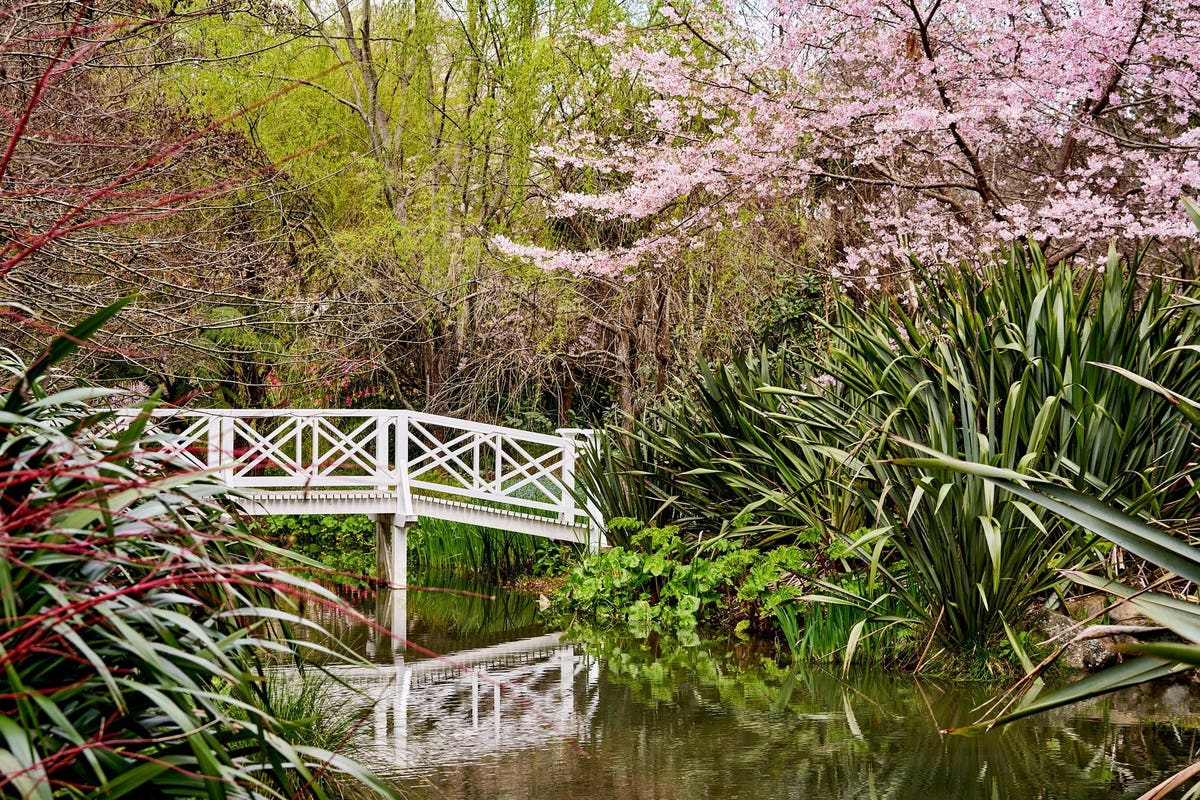 After 15 years, one of New Zealand’s most significant properties has been priced for market at $5.2 million―the grand estate’s otherworldly gardens blushed with myth. Its substantial lake was the set piece for a doomed hobbit who found a golden ring buried on its murky bottom for two and half millennia.

New Zealand film director Peter Jackson, in fact, lives a half-hour drive north of the residence. Jackson was the director, writer and producer of The Lord of the Rings and Hobbit trilogies filmed in New Zealand.

The historic country house’s own origin story dates to 1860 when the property was secured via a crown grant with a spread of 2,300-plus acres. It’s since been pared to about 29 acres and its previous structures razed. Now, a 1924 American Colonial Revival home graces the land, its eight-bedroom interior done in a Georgian layout of 900 square meters.

Located in the South Wairarapa district at the southeast end of the country’s north island, the heritage estate called Fernside was mastered by Kiwi architect Heathcote Helmore. He also designed the 1933 Vogel House, for a time the official Wellington residence for the country’s Prime Minister.

An oak-lined entry drive of nearly 2 kilometers is best driven at a leisurely pace. A dozen or more sheep wander the road’s edge, keeping grasses tidy.

Fernside’s exterior is of white weatherboard accented by forest green shutters, all topped with a steep neo-Georgian slate roof. Fully restored gardens that gratify at every turn―they’re counted as among the finest in the country―lie beyond. But first, the home.

To the left, there’s a formal dining room and to the right, two drawing rooms, one with an adjacent sunroom. “The drawing rooms are big, but they’re still intimate and with views onto the gardens,” says listing agent Anthony Morsinkhof of PQ Property Intelligence. “They’re north-facing with lots of light and with views to the gardens. With big roaring fires blazing in them, it’s very special.”

Overall, “you feel you’re at home” in the estate, he adds. “It’s very livable. You don’t get lost in this home even though it’s large, whereas, in other properties, it can be so easy to get absolutely lost.”

Beyond the dining room are a modern commercial kitchen, utility areas and staff offices with a dedicated staircase that ascends to three staff bedrooms. On the first floor near the kitchen, there’s a flower room, a box room and one for wine. Of note is a centralized bell system linked to upper rooms for summoning servants―it recalls the one featured in Julian Fellowes’ historical drama series, Downton Abbey.

There’s also a lift, currently not working―the first of its kind in New Zealand.

Just up the handsome Georgian-style staircase, separate from the staff stairs and bedrooms, are five spacious bedrooms, four of them en suite, “which was very much ahead of its time,” says Morsinkhof, adding that the bathrooms have original tile and Carrara marble.

Floors in the residence are of oak and Jarrah, a eucalyptus native to Western Australia prized for its beauty and durability.

Intricate Regency-style plasterwork adorns the walls in “Ella’s bedroom” set with a fireplace. The room was named in honor of socialite Ella Elgar, wife of Charles Elgar who purchased the property in 1888. Elgar built a homestead that grew to 24 rooms. Thirty-five years later, a fire destroyed the residence and the numerous antiques collected by the well-traveled couple. The Elgars rebuilt in 1924.

In 1949, after the Elgars died, Fernside was carved up and sold to the United States government for £12,000 as a residence for the American ambassador to New Zealand, Robert M. Scotten. He and his wife lived at the English country estate from 1949 to 1955. Under their watch, the address furthered its reputation as an elegant venue for parties. The Scottens’ overnight guests included American diplomat John Foster Dulles, who later became a U.S. Secretary of State.

Subsequent owners oversaw the property’s repeating cycles of deterioration and renovation. But by 2007, when the current owners bought the property, it was in dire shape. Free-roaming sheep had chewed up the gardens and hedges and the grounds were overgrown. The owners dredged the lake and shored it up. Paths and bridges were restored and a new orchard and herbaceous borders were planted―to start the lengthy list.

Before that, a yearlong exterior renovation included such details as replacing cast iron gutters, section by section. The interior was also improved and freshened.

“Everything the owners added or improved was absolutely in keeping with the property’s history,” Morsinkhof says. “They’ve brought the home right up to top condition. It’s just beautifully presented.”

That presentation includes a two-story 200-square-meter cottage that can be rented or used for guest or staff quarters. It has a full kitchen and three double bedrooms.

In preparation for the garden extension and restoration, the owners visited the United Kingdom’s stellar heritage gardens for inspiration: Great Dixterer, Rousham, Hidcote, Heligan and Sissinghurst.

The arts and crafts-style gardens now proceed with a formal entrance courtyard set with a fountain wreathed by white carpet roses and box hedging. A restored rose garden is adjacent, anchored with a nimble statue of Mercury.

The sprawling main lawn, just outside a drawing room terrace, is ideal for croquet and other lawn sports. Beyond that is Fernside Lake, its mature trees an optimal match for fictional Middle-earth. In 1999, the lake’s now 123-year-old bridge was tricked out Elvin-style for The Lord of the Rings filming. Scenes in the trilogy’s first two films were shot there.

The bridge is reportedly the only pre-existing structure to have been used in the epic trilogy.

Before the COVID-19 pandemic hit, elves, wizards and trolls (but never orcs) could be spotted in the gardens―opened on occasion for The Lord of the Rings tours, popular with costumed fans.

The lake, which dates to the late 1800s, is fed by 3 miles of water races that travel the grounds. They were engineered by Charles Elgar and are sourced at the Tauherenikau River. The lakeshore is planted with an abundance of vibrant flowering plants.

Many of the original Victoria garden details remain, including a brick-lined sound shell that offers a quiet sit. The enclosure amplifies nearby bubbling water.

There are also waterfalls, a well-ordered chess garden (clipped Buxus is used as chess pieces), a formal knot garden, a Japanese water garden, a Victorian sunken garden, a stream-cut native garden and, of course, a secret garden. It’s anchored with a central Italian fountain and includes a summerhouse and entertainment area.

“You walk up to a small opening in a hedge not realizing there’s a walkway there and suddenly you’re entering another garden,” Morsinkhof says. “There are all sorts of little surprises in the garden like that.”

As for the new formal gardens, “the owners created them so they look like they’ve been there a hundred years,” he says, “When, in reality, they’re 10 to 15 years old.”

While the variety of vegetation is vast, a common theme centers on naturalized hellebores, bluebells, giant Himalayan lilies, as well as rhododendrons, maples, magnolias and dogwoods.

“There’s a cathedral of oak trees,” Morsinkhof says. “You walk through them with the light beaming down and you’re lost for words. It’s so incredibly beautiful.’

Outbuildings include a 1920s-era greenhouse and a newly built three-car garage (in addition to the original two-car garage) with a workshop, loft storage area and staff room. Beneath is a 70,000-liter concrete water tank. There’s also a four-bay implement shed that houses a tractor, truck, riding mower and other utility vehicles.

The property comes with an extensive list of utility and garden equipment, with additional items available for purchase. The estate’s various Sotheby’s-quality antiques are also procurable via separate purchase.

Fernside is a short drive from Featherston and Greytown. The latter is “much like the Hamptons in the States,” Morsinkhof says. “Little boutiques, high-end shops and nice restaurants.” About 100 kilometers from Fernside: the ultraluxury Wharekauhau, an Edwardian-style lodge that edges Palliser Bay.

Via the country’s Metlink system, Fernside is an hour’s train ride to Wellington, New Zealand’s capital. The Wellington International Airport is adjacent to the city.

PQ Property Intelligence is an exclusive member of Forbes Global Properties, a consumer marketplace and membership network of elite brokerages selling the world’s most luxurious homes.