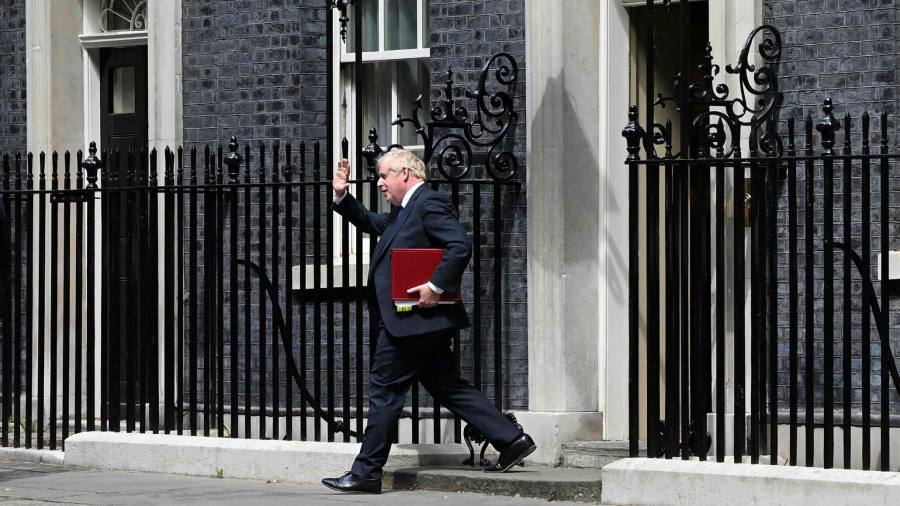 Boris Johnson was rocked by further ministerial resignations on Thursday morning, as senior Tories attempted to force a defiant but broken UK prime minister out of Number 10.

Brandon Lewis, Northern Ireland secretary and once a loyal Johnson supporter, said he was quitting and that the government was no longer being run on the basis of “honesty, integrity and mutual respect”.

Lewis was among a group of loyal ministers who pleaded with Johnson to quit with dignity on Wednesday, as parliamentary support bled away and his government disintegrated.

Johnson responded that he had “a mandate” from the British people and refused to quit. He sacked Michael Gove, one of the senior ministers who had advised him to step down; a Number 10 aide called Gove “a snake”.

The prime minister’s refusal to go quietly is expected to lead to further resignations on Thursday. Lewis said Johnson’s political situation was now “past the point of no return”.

No minister was prepared to defend Johnson in broadcast interviews on Thursday and most Conservative MPs believe the longevity of his premiership can now be measured in days, even hours.

Johnson was warned by ministers on Thursday that unless he resigns he will certainly be thrown out by Tory MPs next Tuesday — the likely date for another confidence vote in his leadership.

Lewis was the fourth cabinet minister to resign from Johnson’s cabinet. Helen Whately, a Treasury minister, also quit on Thursday, saying “there are only so many times you can apologise and move on”.

Damian Hinds, security minister, quit just after 7am, while George Freeman, science minister, resigned shortly afterwards, condemning “the chaos in Number 10, the breakdown of cabinet collective responsibility, the abandonment of the ministerial code, the defence of impropriety”.

More than 50 Tory MPs have quit government posts in the past few days and Whitehall insiders said Johnson was struggling to fill the vacancies.

Johnson’s refusal to quit has prompted some Tory MPs to urge the prime minister not to cling on to power and demean himself. Bernard Jenkin, a leading Brexiter, said on Thursday that Johnson should not act like Donald Trump in the dying days of his premiership.

Johnson told cabinet ministers on Wednesday that he had a direct mandate from almost 14mn voters at the 2019 election, suggesting he did not derive his power from his majority in the House of Commons.

Jenkin told the BBC it was “astonishing” Johnson had not got the message that he would definitely lose a confidence vote next week. “You can go with some dignity or you can be forced out like Donald Trump,” he said.

Some Tory MPs fear Johnson might try to force an early general election to renew his mandate from voters, placing the Queen in an invidious position of having to decide whether to grant a dissolution of parliament.

Johnson said on Wednesday he would not do this and — in that unlikely situation — senior Tories and civil servants would be expected to advise Buckingham Palace that an alternative Conservative leader would be able to form a new government and continue governing.

Johnson’s allies say the prime minister is in a “buoyant” mood and told cabinet ministers that if he was forced out there would be a chaotic leadership contest in the midst of an economic crisis.

One ally said there would be “three months of tearing each other apart to elect a leader with no mandate”, with Labour demanding an early election which the Conservatives would lose.

Johnson won a confidence vote by 63 votes last month, but party whips believe that majority would be swept away in another vote now.

A new executive of the backbench Tory 1922 committee, which sets the leadership contest rules, will be elected next Monday and is expected to authorise a new ballot the next day.

That leaves the prime minister only five days to decide whether to quit or to test his authority in a confidence vote that most of his allies have warned him he is certain to lose.