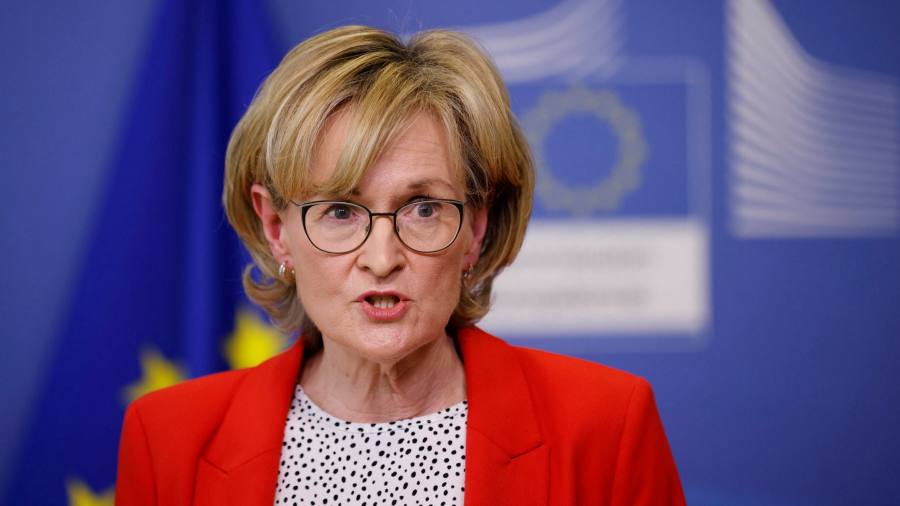 Senior Brussels officials are discussing the creation of an EU-wide sanctions authority, as they push for tougher and more consistent enforcement of penalties related to the war in Ukraine.

Mairead McGuinness, financial services commissioner, said officials were open to introducing an EU version of the Office of Foreign Assets Control (Ofac), the powerful US Treasury agency that spearheads enforcement of its sanctions.

The EU could alternatively give its planned Anti-Money Laundering Authority (Amla) the power to oversee sanctions by amending legislation currently being thrashed out by the European Parliament and member states, she said.

“Anything that would help member states implement [sanctions], and where we see European oversight and co-ordination . . . would be a plus,” said McGuinness, a senior figure in EU sanctions policy, in an interview. “The idea of having an overarching view of sanctions and their implementation is one I would support.”

EU sanctions policy has been hindered by uneven enforcement. While the European Commission proposes any measures, which take force if approved by all EU capitals, their implementation falls to national authorities in the 27 member states.

McGuinness said the EU had made “extraordinary progress” in drafting the sanctions and co-ordinating them with international partners, and there was “strong implementation across 27 different ways of doing business”. But, she said: “In some countries there’s a strong infrastructure on sanctions implementation and others not so.”

The commission was writing to several member states asking them to report on their enforcement of the EU’s Russia-related sanctions, she said.

MEPs from the centrist Renew Europe group recently tabled amendments to the proposed regulation setting up Amla. These would create a new “central office” responsible for overseeing national authorities that enforce targeted financial sanctions, giving the planned EU agency responsibilities such as intelligence gathering and co-ordination.

Including measures taken after Moscow’s annexation of Crimea in 2014, the EU has sanctioned 98 entities and 1,158 individuals. It has also banned exports of sensitive technology to Russia, including for the oil and gas industry, and barred imports of products such as coal and vodka.

McGuinness said she was considering a number of other changes to strengthen the EU sanctions regime. Brussels was considering forcing sanctioned entities to disclose their assets, with criminal penalties if they attempted to hide any. It was also looking at harmonising definitions, including what constituted control of a sanctioned entity, and widening registers of beneficial ownership of assets.

The EU is also planning to look at areas where clarifications to sanctions, are needed or where there are gaps or loopholes in the system.

Brussels was also working with financial institutions to ensure they did not exceed sanctions requirements when “de-risking” business relations, McGuinness said. For example, while she noted that it was good that banks wanted to comply with the sanctions, it was problematic if individuals were caught up when they should not be, such as Russians living in Europe who were blocked from opening bank accounts.

“I think with our guidance and the work we’re doing with both the financial institutions and the member states, these things should clear up in time,” she added. “There may be some problems, but they won’t persist.”