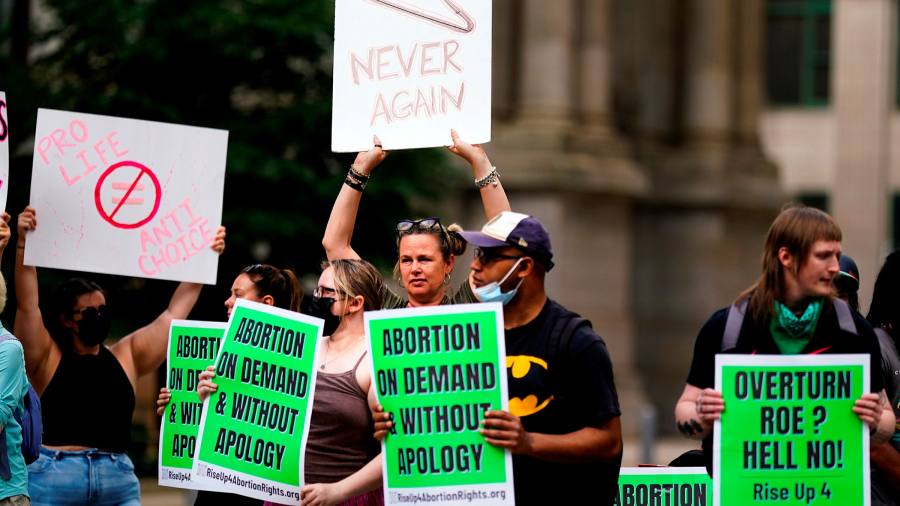 The battle over abortion rights in the US shifted rapidly to Congress and the midterm elections after the Supreme Court overturned Roe vs Wade and gutted the decades-old constitutional protection for women seeking to end a pregnancy.

As conservative states began to implement new abortion restrictions across the country in the wake of Friday’s ruling, Democrats on Capitol Hill and running for national office called for abortion rights to be protected through legislation, and sought to depict Republicans as dangerously out of step with average Americans heading into the November vote.

“The contrast between our parties could not be clearer: while Democrats are the party of freedom and safety, Republicans are the party of punishment and control,” Nancy Pelosi, the Democratic speaker of the House, said in a note to colleagues on Friday evening.

For Democrats and the White House, the opinion handed down by the conservative majority on the Supreme Court on Friday is a nightmare come true — upending years of efforts by the party to keep abortion rights entrenched and protected across the country.

But having lost the most important battle on the judicial front, they are hoping the decision will bring more voters to their side during the midterm elections, both galvanising the liberal base and shifting moderate swing voters away from Republicans.

Speaking from the White House, on the eve of his trip to Germany for the summit of G7 leaders, president Joe Biden said: “This fall, Roe is on the ballot. Personal freedoms are on the ballot. The right to privacy, liberty, equality — they’re all on the ballot.”

The argument Democrats are expected to make over and over again between now and November — in adverts, fundraising emails, debates and rallies — is that Republicans on Capitol Hill are aligned with the extreme, activist justices who wrenched long-established rights away from Americans.

Their hope is that this will serve as a leitmotif of their campaigns, helping offset the impact of high inflation, which has depressed Biden’s poll ratings and sharply increased the chances of a Republican takeover of both branches of Congress in November.

The ruling has also raised the stakes for governor and state legislature races around the country.

“It’s clear that women and individuals, millions of whom will be impacted by this decision, are frightened, fired up and activated right now,” said Melanie Stansbury, a Democratic congresswoman from New Mexico. “And they understand that the only way we’re going to be able to protect our rights is to get involved in the process.”

Within minutes of the Supreme Court ruling striking down the right to an abortion in America, John Fetterman, the Democratic candidate for Senate in Pennsylvania, sought to channel the anger at the decision towards the midterm elections.

“It is unjust. It is wrong. And I’m going to fight it with everything I’ve got,” Fetterman wrote on Twitter. He is running against Mehmet Oz, the celebrity physician endorsed by former president Donald Trump. Fetterman added: “Send me to the US Senate, and I’d proudly vote to codify Roe v Wade into law.”

Republican leaders largely embraced the ruling on Friday. “Today’s historic Supreme Court decision is a victory for the sanctity of life. It will save countless innocent children,” said Elise Stefanik, a member of the Republican leadership in the House of Representatives.

Trump, in an interview with Fox News, praised the decision, saying: “In the end, this is something that will work out for everybody.” But he did not fully take credit for it, saying that “God made the decision”, despite the fact that he nominated three of the six conservative justices who signed on to the opinion.

Rank-and-file GOP lawmakers in swing districts were far more cautious. Brian Fitzpatrick, a moderate Republican from Pennsylvania, said states considering new restrictions in response to the ruling needed to strike a middle ground that “both respects a woman’s privacy and autonomy, and also respects the sanctity of human life”.

Democratic efforts to guarantee abortion rights through new legislation have faltered so far. Although the House passed a bill along those lines already, it has stalled in the Senate, after failing to overcome the 60-vote threshold required to advance legislation.

Many Democrats, particularly progressives, are pushing for Senate leaders to scrap the supermajority threshold in order to make it happen. But this would require the backing of both conservative Democrats such as Joe Manchin of West Virginia, and Republicans such as Susan Collins of Maine, who have expressed disappointment with the ruling but have been opposed to any changes to the Senate rules.

Stansbury said: “They have the opportunity to break the filibuster to move to a vote on this bill, and I would urge them to do so because this is not just a common piece of legislation. This is literally about the fundamental constitutional and human rights of every single woman in the United States.”

But on the other side of the political spectrum, Republicans are also looking to lock sweeping abortion restrictions into law in the wake of the ruling. This would not occur with Biden in the White House but may be on the horizon if they win the presidency in 2024 coupled with control of both branches of Congress.

“Having been given this second chance for life, we must not rest and must not relent until the sanctity of life is restored to the centre of American law in every state in the land,” Mike Pence, the former vice-president who has ambitions to run for the White House in 2024, told Breitbart News.

House Republicans on Friday said they supported a national ban on abortion after 15 weeks of pregnancy, a lower bar than the 20-week ban they had been proposing until today. But Democrats believe that American voters will judge the GOP to be too radical if they keep going down that route. Priorities USA and Naral, two Democratic pro-abortion groups, already launched a digital ad linking a national abortion ban to the overturning of Roe vs Wade on Friday.

“The Republicans who brought us to this point are dramatically outside the mainstream of American views, and they need to explain why they believe they should have this power over women,” said Tina Smith, a Democratic senator from Minnesota. “In the meantime, I won’t stop until safe, reliable access to abortion care is again a guaranteed right.”

UK business and unions demand scrapping of planned bonfire of EU rules
Will the Oil and Materials Stocks Rout End in 2016?
[Inner Game] Anger vs Sadness for Trading Which Emotion is Better Ep 251
Argentina’s fan token sinks 31% after World Cup loss against Saudi Arabia
Mortgage Demand Down Up To 88% From This Time Last Year