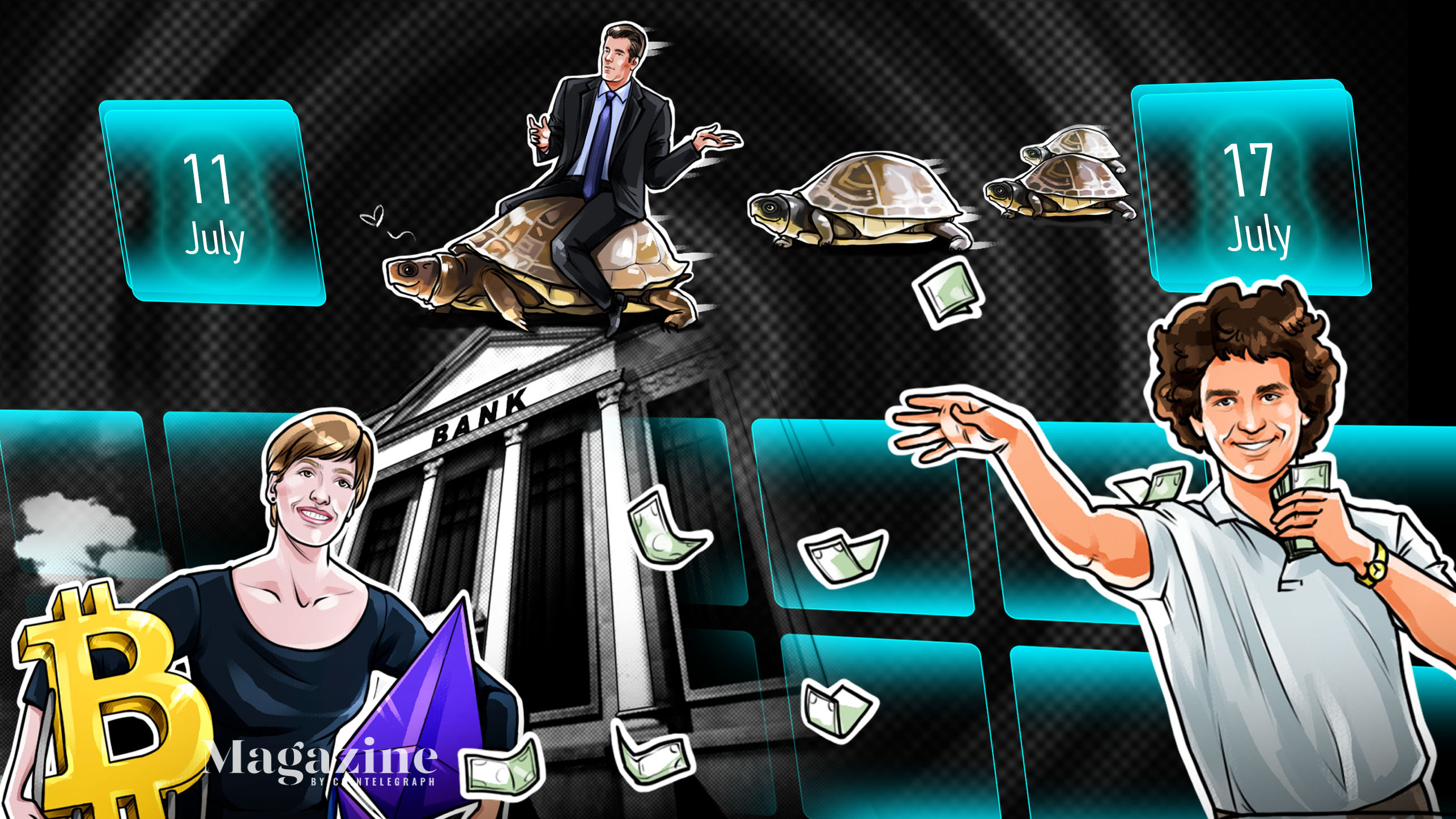 Coming every Saturday, Hodler’s Digest will help you track every single important news story that happened this week. The best (and worst) quotes, adoption and regulation highlights, leading coins, predictions and much more — a week on Cointelegraph in one link.

Bitcoin (BTC) posted another week of range-bound price action. Bitcoin has traded in a fairly tight range over the past several days, acting more like a volatile stablecoin than the bullishly tilted turbulent cryptocurrency folks know and love. Bitcoin has largely been stuck in a price range between roughly $30,000 and $40,000 for weeks.

Nunya Bizniz, a Bitcoin-focused Twitter personality, noted $30,000 as a potential key level on Bitcoin’s price chart, citing a number of reasons, including a Fibonacci level.

Will Bitcoin head north or south next? No one knows for sure, but data from Glassnode revealed folks stocking up on BTC off centralized exchanges, with roughly 2,000 Bitcoin leaving those platforms each day over the past fortnight. Such data rhymes with activity seen in April, when Bitcoin rose to nearly $65,000 per coin.

An approved Bitcoin exchange-traded fund (ETF) continues to elude the United States. This week, the U.S. Securities and Exchange Commission, or SEC, postponed its decision on Wisdom Tree’s Bitcoin ETF, looking for comments from the public on the product — something the commission has done in the past regarding Bitcoin ETF proposals.

“The Commission requests that interested persons provide written submissions of their views, data and arguments with respect to the issues identified above, as well as any other concerns they may have with the proposal,” the SEC detailed in a public document.

More Binance headlines flowed in this week as the exchange decided to halt stock token trading offerings. The company gave no rationale for the move. Folks with current positions in the platform’s stock tokens are allowed a 90-day window to exit their trades.

Over the past couple of weeks, Binance has faced regulatory resistance on a number of fronts.

This week brought further regulatory news regarding Binance. Italy jumped on the bandwagon of national regulators concerned with the exchange. Binance lacks approval for providing crypto trading in the region, according to a warning sent out from the Italian Companies and Exchange Commission.

US government delves deeper into crypto accountability with $10M bounty

United States government agencies have not been shy about regulating the burgeoning crypto industry. Thursday news detailed that President Biden’s team plans to further track crypto asset usage. In part, the team is focused on looking for any ransomware ties to crypto usage.

Folks who help the government track down nefarious characters involved in certain online attacks could find themselves rewarded with as much as $10 million in bounty.

Crypto community divided on whether Bitcoin is an inflation hedge

For many in the crypto community, Bitcoin is considered a potential hedge against inflation. Bitcoin’s recent price action, however, has given less evidence for such classification as inflation surges to decade highs in the U.S. Some folks doubt the asset as a hedge, while others argue the opposite.

“The first part of it is I think the underlying technology of blockchain is really incredible and has lots of different things, particularly in fintech and finance,” he told CNBC. “I think as it relates to Bitcoin — if people want to buy Bitcoin as a substitute, no different from buying gold or some other asset — it’s fine.”

For more info on crypto prices, make sure to read Cointelegraph’s market analysis.

“We’re trying to be the fastest tortoise in the race. The long game pays off over time.”

“The issue isn’t #Bitcoin, #Ethereum, or other crypto protocols — they’re just fine. The risk comes from the banks’ operational processes.”

“I think the regulatory pressure is stronger than before but it will get a lot of bad actors out of the industry and make sure that the industry’s reputation is much better than without it. So, I think this kind of a crackdown may be a good thing for the industry in the long term.”

“If we are the biggest exchange, [buying Goldman Sachs and CME] is not out of the question at all.”

“The easiest industry to reduce overnight was a gray area industry. Some 68,000 gigawatts of power was removed instantly from China just by saying no to Bitcoin mining.”

“Certainly Bitcoin has been a great performer over time. But most of the gains have occurred during a great global deflationary period in which all risk assets rose. Now that inflation is picking up for real, for the first time since Bitcoin’s inception, it’s drastically underperforming.”

Mati Greenspan, founder of a firm known as Quantum Economics

“I believe that cryptocurrency is an inherently right-wing, hyper-capitalistic technology built primarily to amplify the wealth of its proponents through a combination of tax avoidance, diminished regulatory oversight and artificially enforced scarcity.”

“Money is definitely a drug.”

Prediction of the Week

Bitcoin became an official currency of El Salvador in June. However, a recent report from JPMorgan Chase doubts Bitcoin’s ability to function under that context.

Bitcoin’s scalability has been a significant talking point in recent years, with the asset transitioning to a store of value rather than a currency. Bitcoin’s blockchain does not move funds particularly quickly or cheaply compared to mainstream payment cards or various other crypto assets.

In the JPMorgan Chase report, experts note the weight BTC must carry should El Salvador rely heavily on the asset following its recognition as legal tender. “Daily payment activity in El Salvador would represent 4% of recent on-chain transaction volume and more than 1% of the total value of tokens which have been transferred between wallets in the past year,” the report detailed, as per Bloomberg.

FUD of the Week

Allegedly, a group of crypto miners thought it was a good idea to set up shop in a warehouse previously owned by an electricity supply outfit called JSC Vinnytsiaoblenergo.

Pilfering the necessary wattage from JSC Vinnytsiaoblenergo, the unlawful miners used almost 4,000 PlayStation 4 consoles, as well as many other tech devices, for their operation. Ukrainian police raided the facility.

The regulatory skies may be darkening in the distance, with further crackdown headed toward crypto in the United States.

Bitcoin and Ethereum may be safe from the storm in a direct manner, although regulators may pursue fiat on-ramps and middlemen connected to crypto activities, according to Avanti Bank & Trust founder and CEO Caitlin Long.

The United Kingdom’s Financial Conduct Authority, or FCA, sees crypto investing as highly risky, according to a draft of a speech from FCA executive Nikhil Rathi.

The agency wants the country’s people, particularly its younger generations, to know about such risks, putting about $15 million worth of pound sterlings to work toward getting its message across. “More people are seeing investment as entertainment,” Rathi expressed, as per the draft.

The Chinese government’s ongoing crusade against cryptocurrencies might have dramatic consequences for both domestic and global crypto traders.

Adopting a decentralized way of life, from small steps to giant leaps

Decentralization may seem out of reach for many, but here are some realistic ways to reject the idea of centralization in our daily lives.

Bitcoin sees most long liquidations of 2023 as BTC price tags $22.5K
Beyoncé, a $100,000-a-night suite and a red carpet of influencers: Dubai basks in its booming economy
Ethereum staking withdrawal testnet Zhejiang to go online Feb. 1
Survey says: 2023 issuance will be the same; rates will rise
Why did Bitcoin price go down today? BTC traders brace for $23K retest